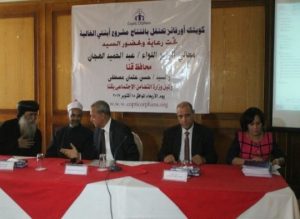 I’m excited to share some more good news with you about our Valuable Girl Project partnerships with local Community Development Associations (CDAs). Last time, I told you about the launch of a new session of the Valuable Girl Project in Assiut with seven new CDAs. Now, I’m happy to let you know about another city where Coptic Orphans launched a new session of the program. On October 18, 2017, 90 key figures from the governorate of Qena came together to the signing of our contracts with another 7 local CDAs.

The event in Qena brought together several government dignitaries, local religious leaders, representatives of other non-governmental organizations, and members of the press. The event was held under the auspices of Abd Al Hamid El Hagan, the governor of Qena, who personally attended along with top officials from the governorate and the church. These included Bishop Beman, several undersecretaries of Ministry of Social Services (MOSS), Mouhmed Al Tarawy, the Undersecretary of the Ministry of Endowments (awkaf), and the chairpersons of the partner CDAs and their staff.

Before I tell you more about what the Valuable Girl Project aims to do, I want to tell you what brought all of these people together by painting the picture of the real difficulties faced by girls in cities like Qena.

In impoverished parts of Egypt, tradition often excludes girls and women from the education offered to boys and men from the same age group. Less education leads to fewer opportunities, fewer opportunities lead to less power, less power leads to being viewed as being less valuable—which leads to exploitation. Viewed as “less valuable,” girls are more likely to be deprived of critical health care and are susceptible to harmful practices including female genital mutilation, child marriages, ‘honor’ killings, domestic child labor, and sexual violence.

To address these problems, the Valuable Girl Project works to empower girls and women by helping them complete their educations, raising their self-esteem and giving them more power over their lives. To do this, the Valuable Girl Project adopts educational one-on-one mentoring relationships between a “big sister” and a “little sister” to assist with overcoming learning difficulties, provide a role model, and to offer guidance and support that they might be lacking at home. To achieve this, we strive to create a safe space to where girls can develop their sense of self-worth and to develop leadership skills.

The event in Qena started with a welcome from Coptic Orphans where I thanked the governor for his support, and expressed my gratitude to the undersecretaries of MOSS for helping the relevant CDAs get official approval.

Following this was a presentation by Salwa Youssef, the representative of Coptic Orphans, who gave introductory remarks about Coptic Orphans and the Valuable Girl Project, which included the goals and philosophy of the program.

Afterwards, several distinguished guests spoke at length about the work of the Valuable Girl Project in Qena, which displayed the breadth of the support the project has in the city.

Following the governor’s words, the chairpersons of the seven partner CDAs signed their contracts and received additional relevant documents.

I can’t express how extraordinary an event of this type is in Egypt. By God’s grace, your love, prayers, and support are what make milestones like this possible – thank you so much!