Working with the Church

Everything Coptic Orphans does is inspired and guided by the teachings of the Church.

Coptic Orphans works in 60 dioceses in Egypt, in close partnership with each local bishop, who also guides in areas of local need and nominates new volunteers.

Bishops from the Coptic Orthodox Church from all levels have expressed their support and encouragement for our work, including His Holiness, the late Pope Shenouda III of Alexandria, who told us, “We appreciate very much what you are doing… you are saving God’s children… As it says in the midnight prayers, you ‘remember those who have no one to remember them.'”

So it was a blessing beyond all imagination when His Holiness Pope Tawadros II sent us this letter in June 2017, in which he wrote:

“We would also like to thank everyone who supports you in implementing these activities and programs in the field of education, which is the key solution for the developmental and social problems in Egypt, and for developing good citizens for their country and church. May the Lord bless this vibrant service and reward you! With our love for the management and the staff and all the volunteers! May the Lord embrace you with His Providence.”

We were also grateful beyond words to His Holiness when he appeared in person at the Sept. 28, 2014 gala in Toronto, Canada to accept the Coptic Orphans Leading by Example Award. The award honors pioneers whose character and achievements make them role models in Egypt and around the world.

His Holiness was our clear choice to receive the award because of his noble and constant efforts to realize his vision of an Egypt of tolerance and prosperity, where Christians and Muslims live alongside one another in peace. Furthermore, His Holiness has been an incredible advocate for the children where we serve as far back as 1999 when he was a general bishop.

His Holiness told the audience in Canada: “I served indirectly with Coptic Orphans in the areas where I was general bishop alongside Bishop Bachomious. During this time, I watched Coptic Orphans and their very effective service in three locations: the border city of Marsa Matrouh; King Mariout, a desert city; and El Beihira, which is an agricultural governorate. I watched them impact all three of these areas.”

As always, His Holiness directed everyone’s thoughts towards the right place — in this case, the joy that comes with serving the children and their families as part of One Body in Christ. As he said: “Bravo for your service! And I’m not sure who’s happier, you or the children you serve — you are all happier!” 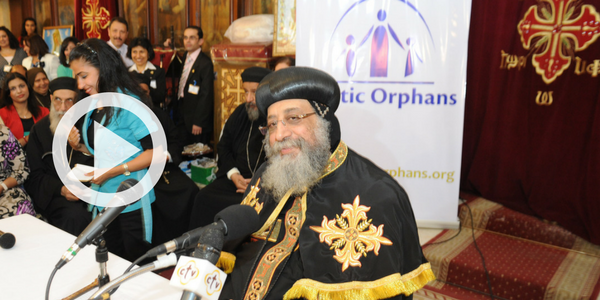 By God’s grace, working in one accord, shepherded by His Holiness, the guidance of Their Graces the Bishops, and the Reverend Fathers, we will continue gratefully serving the fatherless children of Egypt.