Cycling for the Children Raises Funds, Spirits in California! 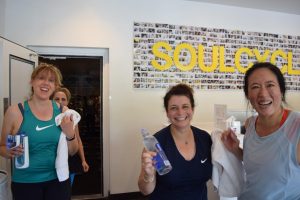 Gearing up in California to support the children in Egypt!

When Coptic Orphans supporter Lara Mikhail from Tarzana, CA, reached out with her idea of hosting a SoulCycle fundraising event, I was thrilled, but when I actually saw the pictures and read her email about how the event went, I had to share it with you. I’m constantly amazed at how the cause of educating orphaned children in Egypt can create a spirit of generosity that transcends continents. As participant Sawsan Rafidi said: “The donors participated in a fitness program and the recipients were helped with much-needed funds . The event brought together kids and adults of all ages, cementing family ties and friendships. It made us make new friends in the spirit of giving.”

Firstly, I’d like to thank every single person who made the long drive out to SoulCycle Brentwood on that hot Saturday afternoon. Thank you for deciding that it was worth sweating buckets and doing something that you’ve never done before in order to make a difference. The money that was raised will make a huge difference in the lives of many Coptic orphans.

A year ago, I was seeing SoulCycle everywhere; every drive down to the west side of Los Angeles we were passing multiple branches, and pictures of the trendy yellow cycles and neon signs were dominating my Instagram feed. At the start of the summer, I finally decided that I needed to see what the hysteria was all about. Walking into my class at SoulCycle West Hollywood, I saw such a diverse group of people. I could see how it has formed a community; people of all backgrounds united by cycling.

This past year has been extremely focused on diversity, tolerance, and peace in the wake of many hate crimes and terrorist acts. Despite all the terrible things happening around us, as Christians, we must have faith.  The major attacks against Coptic Christians in the past few months have significantly affected me. How can such tragedies happen on God’s watch? Where is all the love in the world? What struck me most is how little the media is covering these horrific attacks. How are the people lost in Manchester worth over a week of coverage while the 28 Copts brutally shot on their way to pray only deserve a place in the news ticker? I decided that despite my strong faith, it is not enough. I needed to take action, not only to raise money to help the children, some of whom were orphaned as a result of these attacks, but also to raise awareness of the situation of Coptic Christians.

The event itself was simple to put on. Through conversations with family and friends, and through my social media, I let everyone know that by showing up at SoulCycle on June 10, they could make a difference for fatherless Coptic children in some of Egypt’s poorest communities! Each person gave a gift to take part, and that money is now supporting the 10,000 children who receive love and mentoring from Church-based Coptic Orphans volunteers, as well as access to quality education such as private tutoring and school supplies. It was a big success: over 50 people showed up to cycle, sweat, and support the children!

Here are some of the reactions people had to participating:

“It was especially important for me to attend and support Coptic orphans who have lost everything. The least I can do for my brothers and sisters in Christ is help provide for their needs. They are entitled to a peaceful life and to partake in helping them reach that goal is very satisfying. Our every bit of donation helps! The Bible says, “What good is it, my brothers, if someone says he has faith but does not have works? Can that faith save him? If a brother or sister has nothing to wear and has no food for the day, and one of you says to them, ‘Go in peace, keep warm, and eat well,” but you do not give them the necessities of the body, what good is it? So also faith of itself, if it does not have works, is dead.’ (James 2:14-17).” ~ Alina Ovesepyan

“I didn’t really know anything about Coptic orphans or their treatment in Egypt before, but then when I was invited to the SoulCycle event I looked up Coptic Orphans and I found out about what the organization does to help the Coptic widows and orphans in Egypt. It was really interesting to see the issues that exist and how Coptic Orphans is helping support families and I’m glad I got to help out in a small way.” ~ Gabi Berchtold

“It was my first time soul cycling; the experience was overall amazing and fulfilling as I knew it was all for a great cause. We live so caught up in our own lifestyle that we forget to do things that benefit others. This event was a reminder that taking a minute of your day can sure make a difference. It was rewarding in so many levels. Rewarding for me and for someone in need.” ~ Sandy Zelada

“My heart broke when I read about all the children that are only technically ‘orphaned,’ not because both their parents are dead… but because the widowed mothers cannot afford to feed their children. Horrific evil and injustice pervade this world every day and I am often blinded and demoralized by this. I lose my drive; I lose my hope. But then I meet people like you. And I am reminded that there is beauty and love and something worth fighting for here still. Changing the lives of ten or two or one of these orphans is changing the world. It’s changing their world and the value in that is unquantifiable.” ~ Molly Dent

“We are aware that the Coptic people are targeted against and so may innocent people are suffering and being killed from hate crimes. We had a great time and it felt so good to sweat it all out for a great cause!” ~ Natasha Mandelman

I truly believe that my generation has the power to make a difference. I’m amazed every day by my peers who are actively participating in their community and so persistent in their determination to change the world.  For this reason, I chose SoulCycle as my platform for fundraising in order to attract more young people and make them more aware of my mission. It is extremely important for all teens to know about this situation in Egypt so that they can be active in helping the Coptic Christian community and promoting love and tolerance.

I hope that this event inspires other young Egyptians to get involved. There are so many creative ways of fundraising, and hosting a SoulCycle charity ride was fun and easy. My ride for Egypt was much more than raising money; I raised awareness.

If you would like to host a fundraising event for Coptic Orphans, please send us your idea at info@copticorphans.org. Thank you, and may God bless you!