For those of us not well-acquainted with Pope Cyril IV (not to be confused with the well-known, Pope Cyril VI), he was a man of God who accomplished much during his relatively short papacy, serving as the 110th Pope of Alexandria and Patriarch of the See of St. Mark. He is regarded as the “Father of Reform” of the Coptic Orthodox Church and is credited for establishing a great printing house and printing many Church books.

In one of his first acts as Pope, he opened the first modern Coptic school. Despite his short-lived tenure of seven years during which he faced tremendous internal and external opposition, Pope Cyril IV opened five modern schools including two for females making him the founder of native female education in Egypt. It is due to his eﬀorts that the Coptic language was resurrected. He also made sure to teach Coptic students the old Coptic hymns, saving them for posterity.

Pope Cyril IV also took a deep personal interest in his schools urging foreigners to visit and assess the quality of the education they provided. Most remarkable is that he opened his schools to all students regardless of creed. Given that education was provided for free from the papacy’s own ﬁnances, such a move was progressive at the time. Five of Egypt’s future Prime Ministers graduated from these schools. It is thanks to his efforts that Copts were well equipped to face the challenges of their time and preserve their identity and heritage.

In honor of his work to educate and preserve identity, Coptic Orphans launched the Pope Cyril IV scholarship, a merit-based scholarship supporting the organization’s mission to engage Coptic Diaspora in the issues that are deemed important to the welfare and status of Copts in the homeland. Through this scholarship, Coptic Orphans is committed to support a generation of promising Coptic American youth as they embark on their higher education journey in the top US universities in the fields of Journalism, Political Science, and International Relations.

This scholarship is made possible by the generosity of a few donors deeply committed to supporting a young generation who will grow to influence and advocate for Copts in Egypt. These funds are independent of those designated to children. The amount of the scholarship is set at $20,000 paid directly to the awardee over the course of their studies ($5,000 a year for four years).

This program is an unprecedented initiative by a Coptic nonprofit organization supporting higher education. The aim of this initiative is to facilitate exceptional intellectual development and character building of young Coptic Americans who are passionate about their heritage and faith, as well as the future and welfare of their fellow Copts in Egypt. It is anticipated that the awardee would pursue a career that influences policy, advocate for the Coptic cause, and spearhead positive change in the political, economic and social spheres for Copts in Egypt and around the world. The Pope Cyril scholarship is awarded annually to one young Coptic American applying to an undergraduate program at one of the top schools in the US.

Coptic Orphans awarded the 2019 Pope Cyril IV scholarship to its very first recipient Ms. Karen Samy. Karen Samy is a first-year student at Georgetown University’s School of Foreign Service. Karen was born in Toronto, Canada and lived in Egypt until she was four years old, then immigrated to the Washington, D.C. area in 2004. Karen also spent four years living in Saudi Arabia, where she was exposed to humanitarian, political, and social issues which inspired her to pursue a BS in International Politics.

She hopes to represent the Coptic community in her future work, whether in a government position, work with non-profit organizations, or international law. Karen strongly believes that in order for the Coptic community to become a strong presence on the international stage, we must encourage our youth to pursue the fields that allow them to understand and represent Coptic concerns internationally. She cares deeply about many issues, including women’s equal opportunity for education and inclusion in politics, sustainable development, and the intersections of religion and diplomacy. 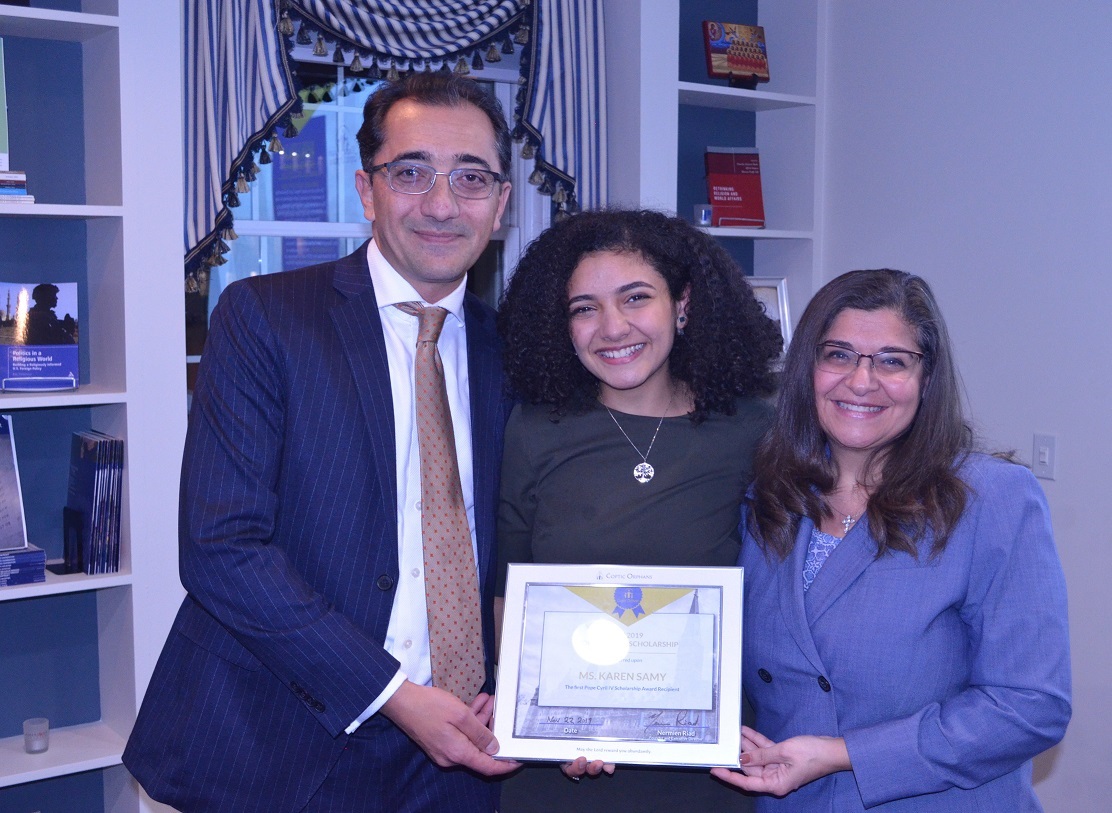 You too can be the next Pope Cyril IV scholarship recipient! Applications are now open for the 2020 year and due on April 15th. We encourage all young Coptic Americans who meet the eligibility criteria and are passionate about their heritage and faith, as well as the future and welfare of their fellow Copts in Egypt, to apply.

For eligibility criteria and the application, visit https://copticorphans.org/programs/pk4/. The recipient will be notified on June 1, 2020, and will be recognized at an award ceremony in Washington DC in mid-June. For general questions about the scholarship, please email: PopeCyrilScholarship@copticorphans.org.