Magda’s Journey from Despair to Strength 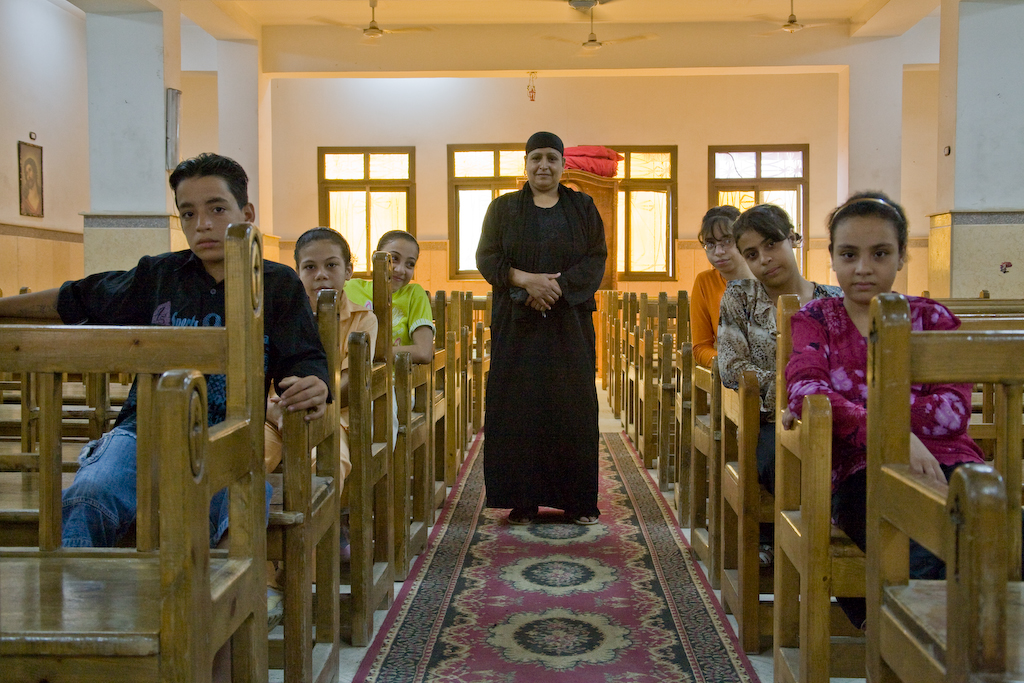 A widowed mother stands in church with her children sitting in pews on either side of her.

On the day I met Magda*, she told me she was in so much pain, she wanted to die.

Magda is a 42-year-old widow and mother of four in the south of Egypt. She lives in the countryside, wears black clothing, and sports a modest hairstyle and eyeglasses. Today, when she speaks, I can hear tenacity in every word.

But when we met ten years ago, this was far from the case.

As an orphan herself, Magda was married off at 16 years old.

“I loved him,” Magda tells me of her late husband. “He was so kind. He was my husband, and a father, and a brother to me. He was my support. We had four children and a happy life.”

After their fourth child, Magda’s husband suffered from kidney failure, and he died shortly after. In the span of just a few weeks, Magda’s world crumbled around her.

“Life seemed dark to me. When he passed, I was so devastated I collapsed.”

In Egypt, widowed mothers are often viewed as weak, broken, and defenseless. They are expected to be a physical picture of despair for the rest of their lives; to even get her hair done or wear nail polish is seen as improper. Others find them an easy target for financial abuse.

Loan sharks descended upon Magda quickly, leaving her to deal with her late husband’s debt without any income or financial knowledge.

But for Magda, the worst part of her new reality was the control her husband’s family gained over her and her children’s lives. She was forced to rely on them for housing and care. Her brother-in-law took advantage of their situation and forced her middle-school-aged son to work for him.

Magda fell into despair. She needed more than money; she needed independence and real help without strings attached. Neither her family nor her in-laws really took the time to check in on her.

She continued to live in misery until she met Amal, a volunteer Representative in the Not Alone Program and a servant in Magda’s church. Filled with pain and frustration, Magda told her story to Amal.

Amal spoke life to Magda. She told her, “Don’t worry about covering the children’s education. Coptic Orphans will support you and God will manage everything.”

Magda felt comforted, yet ashamed that she would have to rely on monetary support from some organization she didn’t know much about. But all she cared about was that her children continue their education.

“When I first joined Not Alone, I thought I’d receive money for educating my children and nothing else. But then I realized that the program is different than what I had assumed. Even I learned a lot.”

Not Alone supports widowed mothers as they become a sole provider for the first time in their lives. It does this by organizing workshops for mothers on self-image, financial literacy, positive discipline, and child protection from different forms of abuse. These workshops boost the mothers’ self-confidence and show them that they are capable of providing their children with everything they need to thrive.

“Since I joined Coptic Orphans, Mrs. Amal hasn’t stopped visiting me. She has been taking care of us for eight years now. Her visits make us feel that we matter to someone,” said Magda.

Years later, Magda has progressed tremendously. She built a home for her family and moved out of her in-laws’ place. She now has what she needed most urgently: independence.

By the grace of God, her older sons finished their education. She says one of her happiest moments was when her third son began his last year of high school and started preparing for university.

“I never expected that one of my children would make it this far. He is the only one in both families who will go to college. I’m satisfied with my life,” she continues with pride. “Now, I’m building a second floor for my older son in our house so it is ready for when he decides to get married.”

Magda’s life and way of thinking has transformed drastically over the past decade—from a deep pit of despair to restoring her self-confidence and empowering her children through education.

*Names and details have been changed to protect the privacy of mentioned individuals.